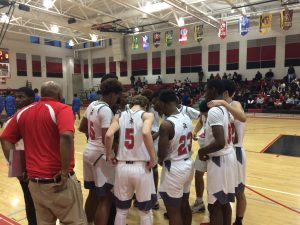 basketball team raised its record to 8-2 with a win over JFK on Thursday at John Marshall. Marshall led throughout the game, defeating the Eagles 64-48. Quentin Williams led the Lawyers with 27 points, with Ramier Oates contributing ten points.

Marshall jumped out to an early lead, scoring the first eight points of the game. Williams scored the first six of those points, setting up his big day.  JFK narrowed the lead to 10-5 by the end of the first quarter, with Marleo Boulton scoring four of the Eagles five points.  The Lawyers went on a 16-6 run in the second quarter, taking a 26-11 lead with just over two minutes left in the first half. JFK closed the half on an 8-2 run, and the Lawyers had a 28-19 lead at the break.

The Lawyers maintained a lead throughout the third quarter, but could not shake off the stubborn Eagles. JFK cut the lead to 41-37 with just under six minutes remaining in the fourth quarter. They seized the momentum from the Lawyers, but Marshall  was able to regain composure. “When we could have folded, we didn’t”, said Head Coach Rich Austin after the game. The Lawyers eventually went on a 9-2 run to take a 56-44 lead with 2:22 left in the game. Williams was key down the stretch, scoring 12 points in the final quarter.

Marshall remains undefeated in Senate League play with a 4-0 record. They return to action Tuesday afternoon with a game at Max Hayes. Their next home game is a conference matchup with MLK on Friday, January 19. Coach Austin is looking forward to the challenge of competing for the conference title. “We have a lot of work to do”, he said.