The varsity football team ended its season in style, defeating JFK 18-0 under the lights at the Collinwood Athletic Complex. The Lawyers had back-to-back wins to close the year, raising their Senate League record to 3-4 and creating momentum for the offseason.

Quarterback Rasheed Roundtree opened the scoring with a 25 yard touchdown pass to Devyn Ellis in the first quarter. Kicker Ramesh Kafley added the extra point to make the score 7-0 John Marshall. Kafley extended the lead with a 32 yard field goal in the second quarter, pushing the score to 10-0. The Lawyer defense, which was dominant throughout the game, added a safety by Cervante White to make the score 12-0 at halftime.

The Lawyers continued to hold off the Eagles in the second half, not allowing any points. Allen Dixon had a 25 yard touchdown run in the fourth quarter that made the final score 18-0. The Lawyers dominated the ground game, as Willie Branch rushed for 118 yards on 14 carries. Taevyn Coles had ten rushes for 34 yards, and Ellis ran for 28 yards on five carries. Willie Phillips was the leading receiver with 45 yards on two catches.

Marshall’s 3-7 season record is an improvement over last year’s 1-9 campaign. Head coach Terrance Cleggett has reason for optimism going into next season, when John Marshall’s new stadium will be finished and ready for the 2018 season. 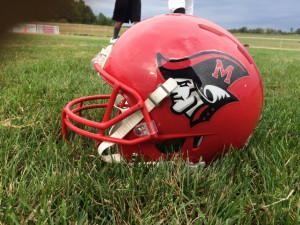