Lawyer special teams played well. In addition to the blocked punt, kickoff returns were solid all day. Willie Branch had three kick returns of thirty yards or more, and Willie Phillips had one for 18 yards. The punt and kickoff coverage teams did a good job keeping the Rhodes out of good starting field position. Kicker Ramesh Kafley connected on one of two extra points.

Offensively, quarterback Rasheed Rountree threw for 75 yards and ran for 36.  Phillips was the team’s leading rusher and receiver. He had five carries for 41 yards and a 30 yard pass reception. Taevyn Coles had a touchdown reception of ten yards, and Doug Clements had a pair of catches for 20 yards.

The Lawyers return to action Friday at 3pm against Whitney Young. The game will be played at JFK Field. 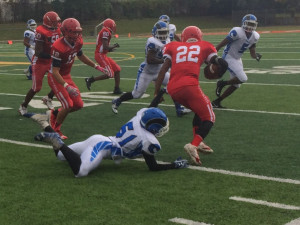