The varsity volleyball team defeated John Adams Tuesday afternoon to advance to the Senate League championship game. They beat the Rebels in four sets to extend their string of conference wins to 13.

The game was played at John Marshall’s gym (aka “The Court Room”) in a highly festive atmosphere. A good crowd of Lawyer fans were in the stands to root on the team, and the new varsity cheerleading squad was there. Adams opened the first set by taking a 7-4 lead, but Marshall overtook them with a five point rally. The Lawyers held a narrow advantage for the rest of the set, winning it 25-22.

The Rebels, who featured some good height and quality hitters, responded in the second set. They jumped out to a 6-1 lead before Marshall rallied to tie it at 8-8. Adams then went on a four-point run, and held the advantage to take the second set 25-21.

Tension rose in the third set, as the undefeated Lawyers knew they were in a tough fight. The teams went back and forth early, with Adams holding a 7-6 lead. The Lawyers then took control by winning nine of the next eleven points, creating a 15-10 lead. Adams was able to close the gap, but never caught up. The Lawyers won the set 25-21 to take a 2-1 lead in the match.

Marshall dominated the fourth set, winning by a commanding score of 25-10. That clinched the win with three sets to one, and set off a celebration among the Lawyer fans. Marshall advances to play John Hay on Thursday night at 6pm for the conference championship. The match will take place at the EPC, located at the former site of East High School. 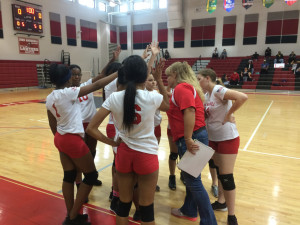